FP2’s Goals Moving Forward (…again)
Well, last time I was writing one of these the world was an entirely different place unfortunately. Obviously things have been turbulent for everyone and luckily things have finally been slowing down for me personally, allowing for some sort of clear plan and direction again for FP2, so prepare for a lengthy post!

Essentially this is just a bit of a refocus from last time, the FP2 team wants to move away from a “PC/Mod Centric” community & into more of a “Creative & Resource” based community across both platforms (discord & forum) with a few new & renewed focuses:

* Release mods, collections, & more that are held to high standards & continue to expand the game beyond the end of Spike’s official development
* Compile & centralize creative resources, ideas, or tutorials useful to FPWW customization
* Provide the community with tutorials & tips for the upcoming official “MoveCraft DLC” tools when it releases
* Continue to increase usability & community interaction with the Japanese playerbase

MoveCraft Streams on Twitch
If you’ve had an interest in the MoveCraft DLC & creating custom moves, take the time to check out the streams I’ve been doing on Twitch previewing the MoveCraft DLC & answering questions about the tool. Although I’ve been a bit busy handling real life stuff, my stream schedule will resume with some form of normality this upcoming week. If you can’t tune in live to catch a broadcast, I still suggest checking out the VODs when you can to get some insight on the tool & its function.

Making his obviously long awaited return, we’re excited to welcome @TheAceThatRunsThePlace back to the active development team as he updates his mods (including auto-set cpu & animated rings) while also releasing a brand new mod recently, with plans for more. 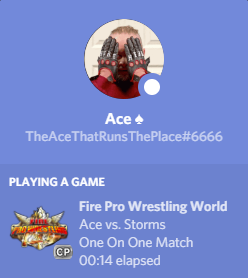 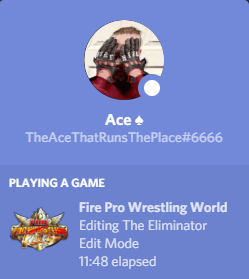 Untitled Tag-Team Match Mod
Planned features include limiting tag team interference to specific conditions so that cutplay can remain enabled, but not have them break up every single pin, expanding on the meta of tag-team matches and settings.

A workhorse as always @View619 has been hard at work adding more & more features, expanding more & more of his mods over the past weeks. Whether or not you’re looking for the most extensive tracking tool in Fire Pro or possibly a few new match options, there’s something for you. 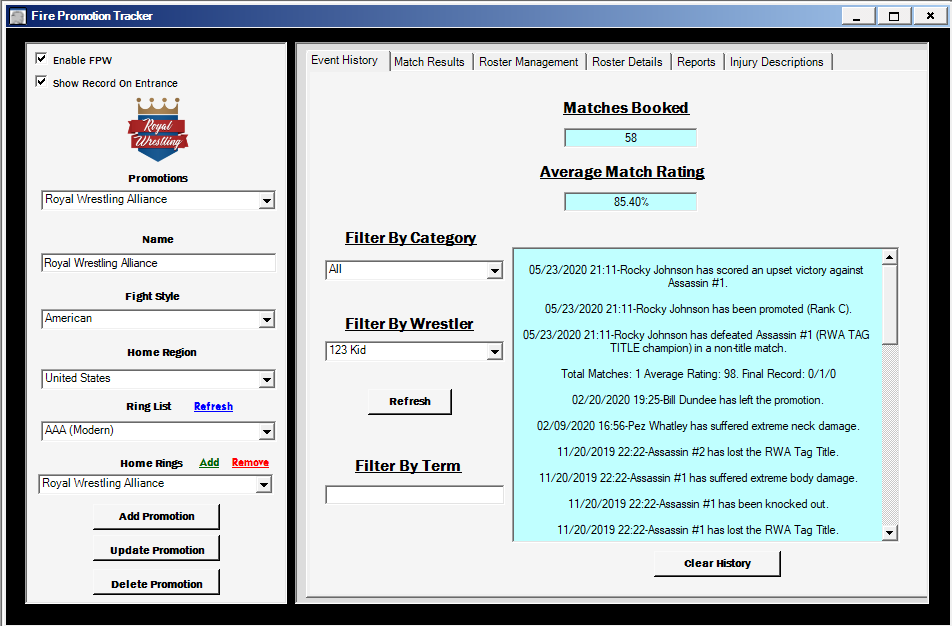 Extra Game Options (EGO)
* Added a mod option from @TheAceThatRunsThePlace ‘s Attire Extension, Referee Costume Extension. This allows you to use multiple attires per referee, in a similar manner to the old option.
* Added Forced Signature Move Sell, where extra down time is added to an opponent after taking a signature move.
* Added Automatic Ring Configuration and Dynamic Attendance Level

Things are always happening with the ModPack and the best way to stay up to date with it is to join @Carlzilla ’s discord, however this DevBlog also happened to coincide with the release of a ModPack update in preparation for the MoveCraft update.

ModPack Updates
* Made some behind the scenes changes to prepare for Move Craft’s eventual release. The average user will not notice or care about these changes, but I’m hoping it makes the update real easy to deal with since I’m getting a jump start.
* Added descriptions of all Extra Special Skills to the form. The skill will be explained when selected.
* Removed the ability to import new moves with the New Move Importer. All previously installed moves will load just fine, but no new moves will be able to be added.
* Added the ability to set the text anchor location for nameplates in the Arena Texture database.
* Allowed for larger font sizes for nameplate text.
* Text preview of nameplate text on Arena Texture Database form will no longer scale with size changes.
* Bug fixes

Collection Development
One of the biggest processes impacted by the imminent MoveCraft DLC has been the planned development & release of packs. Access to MoveCraft combined with the MoveImporter no longer being supported, packs have been discontinued until the official MoveCraft update.

In spite of the end of the “pack era” the team is already well into work on what comes next. With MoveCraft allowing default support of Custom Moves, moving forward “Collections” will be available on the Steam Workshop once MoveCraft has been officially released, including some old and new collections on Day 1! That’s right the wheels are currently in motion & hopefully most of the prior FP2 releases from the Profile Packs to the Lucha Expansion will be hitting the workshop within the first day of MoveCraft’s release, if not shortly thereafter.

Delayed Collections
Although development hasn’t entirely halted on either the “Entertainment Pack #1” or the “Puroresu History Booster Pack #1”, both are currently indefinitely delayed. Although there isn’t any solid release date and both have been put on the back burner while the transition to MoveCraft continues both ideas are still on the planned priority list for development.

New Collections
With delays & shifts luckily for us comes renewed focus & goals. If you’ve had a chance to tune into any of the Twitch MoveCraft streams, you may have seen the development in progress on one of the planned three new collections. Find more info on all 3 projects below, follow us on twitter for future previews, & check the forum regularly for future devblogs further detailing the projects!

The Wrasslin’ Collection #1’s primary focus is somewhat similar to the old Light Damage Pack in some ways, in which part of its goal is to expand the early/mid match sequences with more holds & exchanges from the days where the matches involved a bit less highspot work, while also introducing some recreations of outdated default animations

The Sweet Science, also known as Boxing, has been an area of the game I’ve wanted to focus on expanding and exploring since reading Senator’s original post about Boxing in Fire Pro. It’s also been something I’ve come back to and revisited multiple times, so it seems appropriate to be one of the first official collections to release. This collection should include a wide range of new strikes & grapples that when combined with things like More Match Types options, no lockup, & MoveLists should provide a much more fleshed out Boxing experience in the Fire Pro engine.

Well if you were around for the early releases of custom moves, you know there’s a few things Ace is really fond of & highspots need love too. There’s not much else to say for this one, it’s pretty straight forward and should be pretty fun.